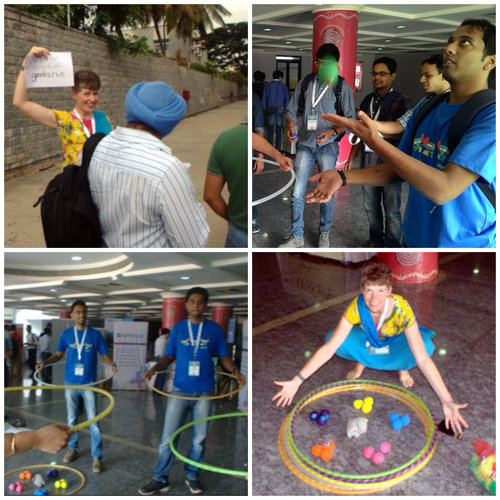 This is more of a Spin Matsuri post than one for Mediatinker, but in the interest of keeping my travel journal full, I can tell you about the personal side of attending a tech conference as a circus person. That’s what I call myself these days, when people ask. “I’m a circus person” or sometimes “I’m a circus performer” even though I don’t perform all that much. And then I launch into an elevator pitch about social circus.

Anyway, I was asked to perform at the event, but that morphed into me leading some Stretching for Geeks sessions in between talks and doing two circus playshops. I made juggling balls and brought hoops and scarves and it was great fun. In fact, there are eight new jugglers in the world now. I’m really proud of the guys who came and played and practiced until they got it.
Having run and organised plenty of events myself, it was interesting to see how it is done here, by my friends at HasGeek. There were about 1000 people in total, with a two track, two day program and vendor booths, too. There was lots of networking time and space for everyone. They had an epic lunch setup with interactive buffet elements like a freezing cylinder that made kulfi, salad bar, tons of veg and non-veg buffet options and live cooking. I ended up with the lunch boxes both days (since I was circusing during lunch time) which were also tasty.
In addition to circusing, I spent both mornings greeting the attendees outside the venue and directing them to registration. That meant people knew my face and came to me with questions and problems. Even though I was a last minute addition to the team nobody knew that! So lots of times I had answers and sometimes I didn’t. I also got up in front of the 800 seat auditorium to make announcements and moderated and impromptu flashtalk session when one speaker had to cancel. I had a lot of interesting conversations with attendees and staff, received many compliments about my ability to keep the enthusiasm going, got a couple of job offers, and made some possibly useful connections for my social circus activities.
All in all, The Fifth Elephant was a great event, even for a circus person. Zoupi enjoyed it, too.