In Memory of Isabella Bird 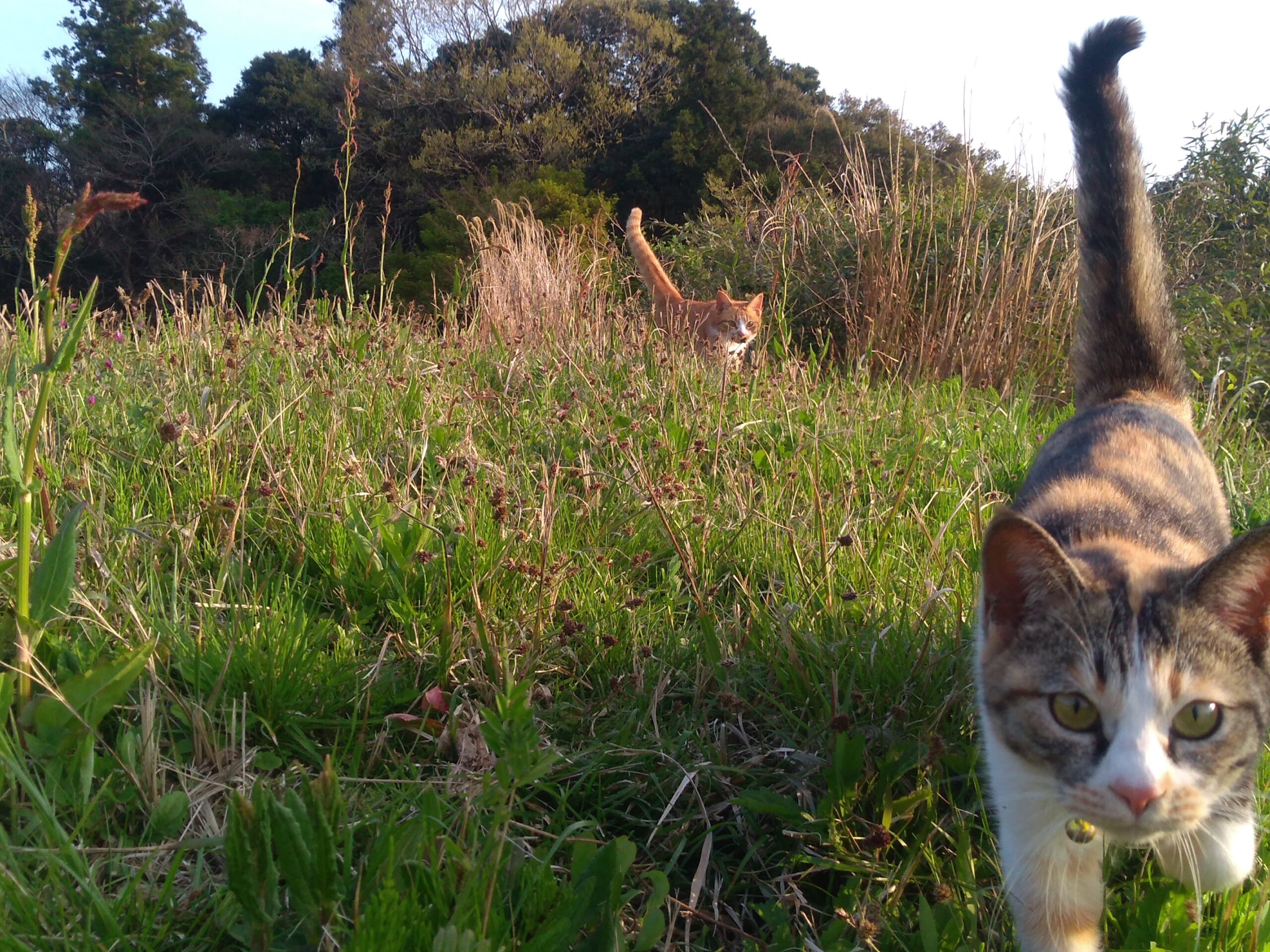 Isabella Bird didn’t have a name when she was born. 3rd in the litter and the only calico, we called her #3 Calico until we understood her personality. Her namesake, Isabella Bird, was an intrepid female explorer in the Victorian age. Our IB was both fearless and kind. Over time she developed numerous nicknames: IB, Little Girl, Squeak, Fuss-pot, Miss Fuss, and Princess. She knew all her names and sometimes admitted it with a well-timed meow or glance.

She was the glue that held her clowder together. She loved her brothers to the point of anxiety. When one of them wasn’t where she expected, she stalked the house and property, seeking them and didn’t settle until they reappeared. Futatsuyama’s death was very hard on her.  She had the same anxiety with Tod & me, getting agitated when we went walking or left in the car. She was always the first to greet us when we arrived home, sometimes running at Tilly with such enthusiasm that I’d make Tod stop so I could get out of the car to guide her away from the parking space.

She looked after her brothers when they were ailing, and groomed Fritter’s ears and face when he had to wear the Elizabeth collar. She always shared her sleeping space – whether it was a box, their favorite basket, or my lap. Their piles usually formed with the heaviest brother on top of her, but she didn’t mind. She was their benevolent queen and they loved her.

Benevolent and also fierce. Although she was smol, she defended her territory from raccoons and feral invaders with the biggest, loudest growl. I was so surprised when I realised one late night that the growling that woke me up was her.

She also gave back as good as she got when someone played too roughly with her, tried to steal her snake, or hassled her, like when Foreground Cat fell in love and followed her around for days on end. Her straight-armed swat was feared and respected by all. Claws in, a thwap on the bridge of the nose got attention and made her point. She couldn’t even, and wasn’t afraid to say so.

IB was a beautiful tabby calico with a white nose flame and a pair of spots that looked like eyes on her hindquarters. She was striking and abstract. I loved to find different patterns on her, but was too intimidated by her complicated patchwork to draw her. Her multi-colored toe beans delighted me. I loved her tidy, sleek fur and her thin tail that opened up like a bottle brush when she was angry. Her feet were always clean, somehow, even when everyone else’s were clotted with mud.

Her calico nature came through in changeable moods and strange habits. She didn’t like to be held except sometimes when she had an immediate need to be cuddled. She loved to sit on my lap while I worked or sat in the sun. She expressed herself with lots of meows and side-eye. She passionately chewed up the edges of the foam joint mats in the studio and downstairs for reasons only she understood. Biting was her thing, I guess; when she was feeling especially loving, she would nuzzle up to my face and bite the mole on my chin.

An outdoor cat with an indoor streak, she was an adventurer and fearless. She explored the neighborhood fields and took walks with me and her brothers. She played joyfully with palm fronds, leapt miles over her brothers when they chased her, and climbed trees so far up that she needed guidance to descend.  And last night, I believe she had one last adventure on the rocks across the road and a dash back home that ended her sweet, too brief life.

I will miss her in my studio waiting for me to pour her some fresh water; her helpful assistance sitting on my desk and biting my pencils as I used them; how she squinched up her face and licked her lips if I pet her while she napped; and how she always showed up to head-butt me when I sat in the sun outside.

Singing Who Wants A Fish? is going to be sadder without “Isabella Bird, she wants a fish!”

5 am Breakfast time
5:45 Studio time with fresh water and lap
6:30 Long morning nap during yoga; help with work
10:30 Stretch legs outside before lunch
11:30 Lunch
12:00 Outside explorations with Gord
15:00 Back home for snack, nap in studio, or playing in the yard
16:30 Dinner time
17:00 Outdoor explorations
20:00 Indoor bedtime nap featuring licking hour and Star Trek
21:30 Fish song and outside bedtime 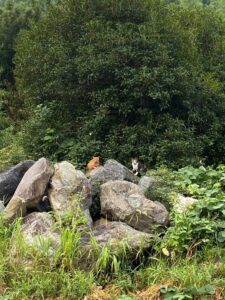 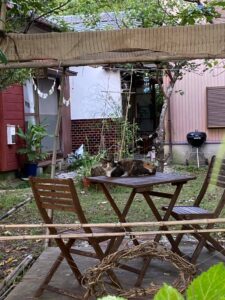 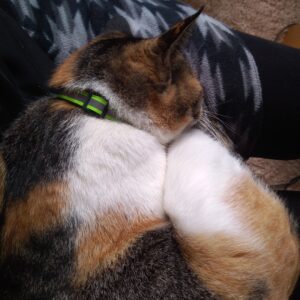 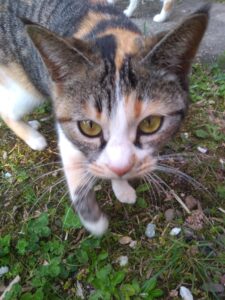 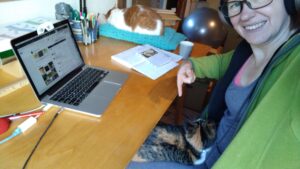 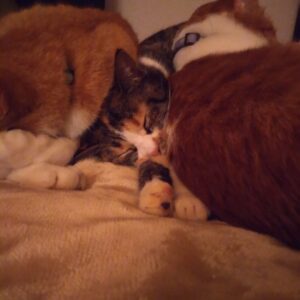 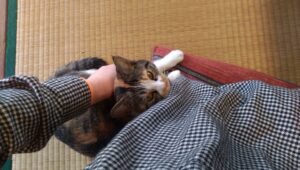 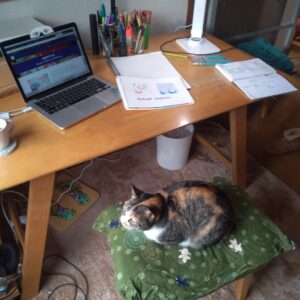 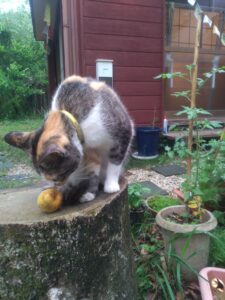 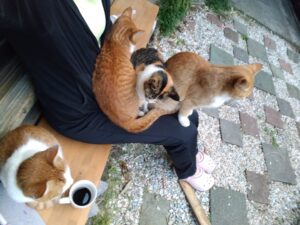 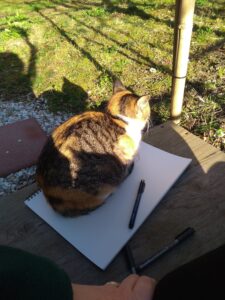 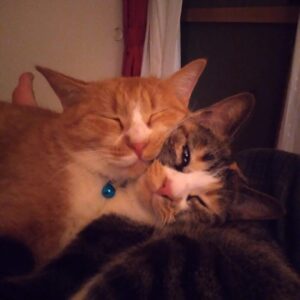 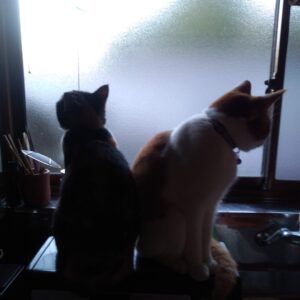 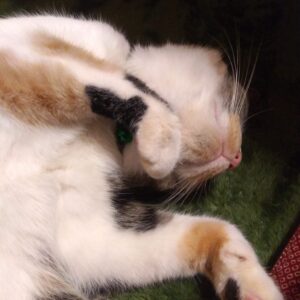 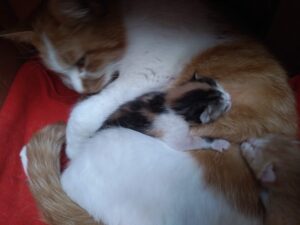 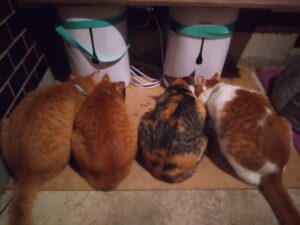 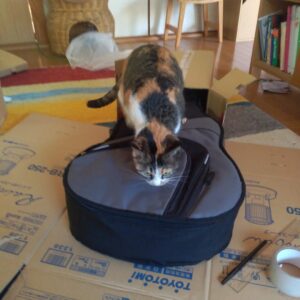 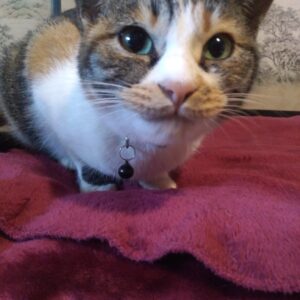 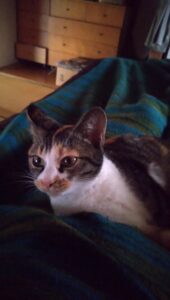 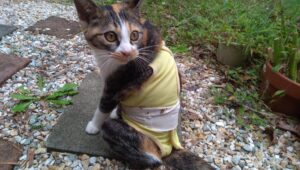 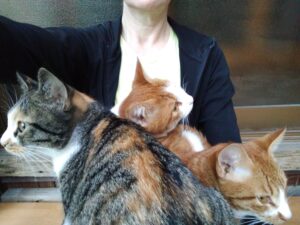 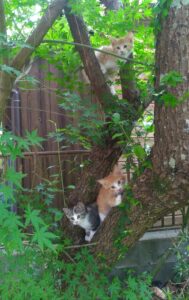 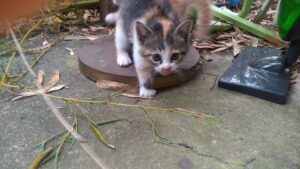 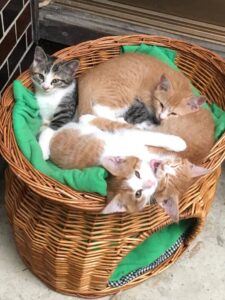 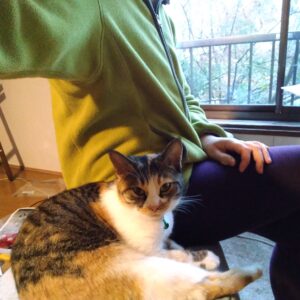 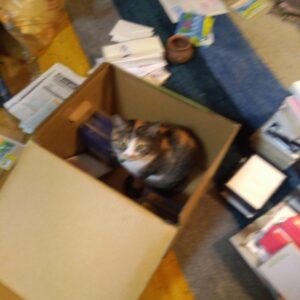 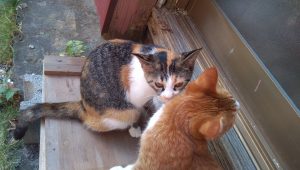 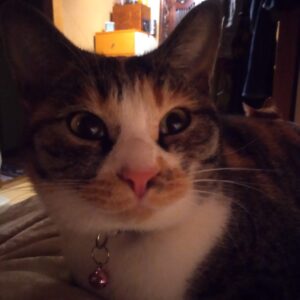