[This was written during a workshop on Memory, Identity and Magical Realism run by my talented sister, Jenny Hill, at ActsofJennius.com. I highly recommend exploring the offerings there. In this assignment we altered a photograph that had a specific memory associated, and then wrote about the altered version.] 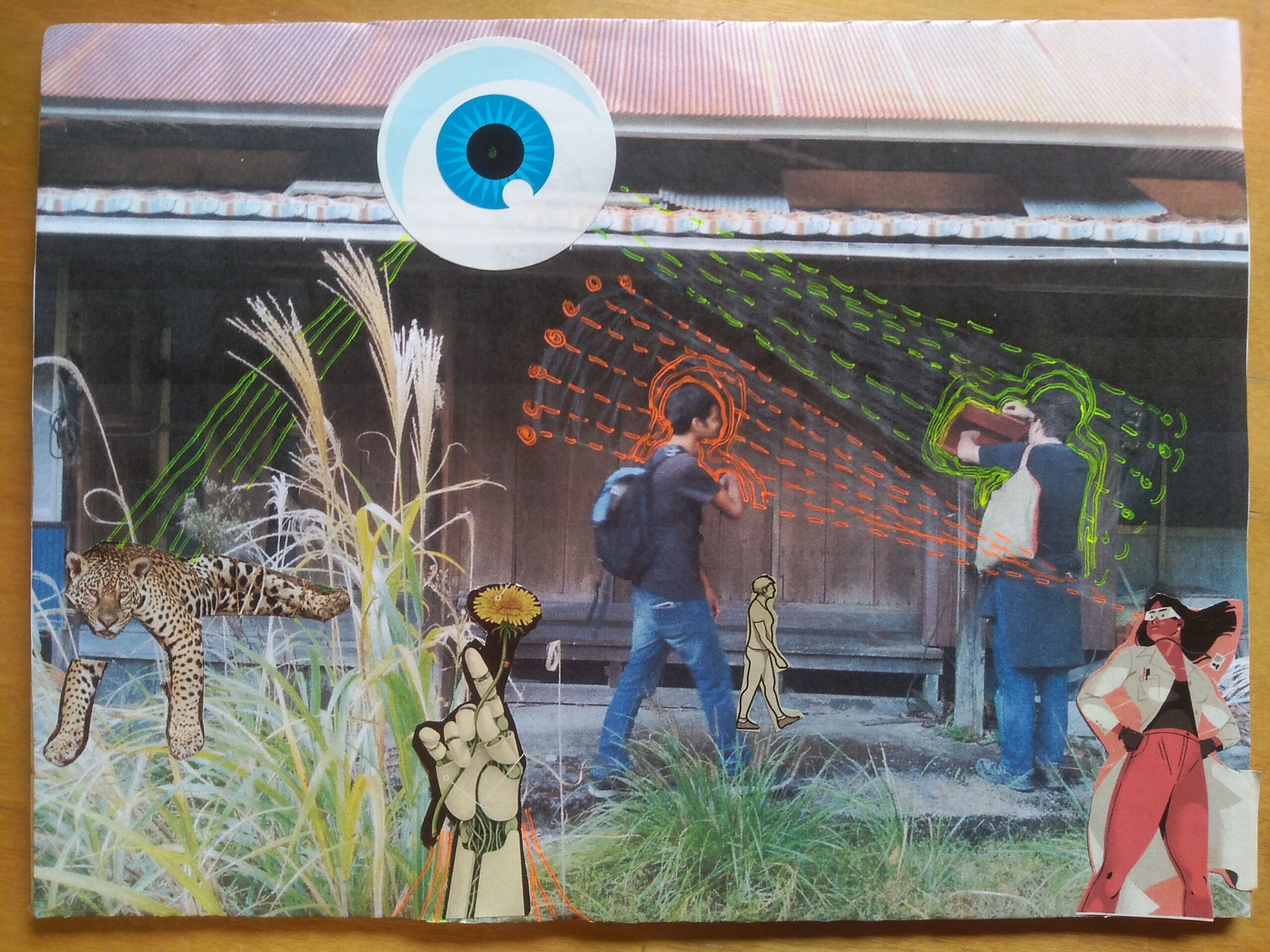 “On it,” replied Agent Aranja. “I have MALE – BACKPACK in my sights.”

Agent Leobald lazily opened his eyes. “Watching FEMALE – PHONE ahead of me. She seems harmless.”

“Don’t let her catch you on camera, Leobald. I’ll handle MALE – TOTEBAG myself,” the Eye said. “We will repel these invaders!”

I snapped a picture as Arun walked along the edge of the narrow walkway toward Tod. “What are you doing?”

“Looking for a clue.” Tod opened a rusty mailbox hanging lopsided from one lone nail and dug inside. “Oh, there’s some old bills or something in here”

The Eye beamed a Ray of Confusion towards MALE – TOTEBAG, who paused briefly, then pulled a handful of papers from the mailbox and looked at them quizzically.

“They seem to be very faded electric bills,” Tod said. “But I think I can make out the name…Mr. Takezawa.”

“I wonder why Mr. Takezawa left his house and all the contents? I looked inside and there’s furniture and all sorts of things in there, “Arun said.

“How old are the bills? Look for a postmark,” I called from across the yard. I was examining the remains of a garden and capturing images for my journal. “Maybe he left in a hurry after the Tohoku earthquake.”

“2007. Eight years ago. Before the earthquake,” Tod answered.

Arun paused and looked back at the door to the house. “That’s a long time. Do you think it’s okay to go in? Maybe there is something unique I can take back to India as a souvenir.”

The Eye chimed in. “Leobald, stay still. I’m hitting you with an invisibility shield. Don’t want your position compromised.” As MALE – BACKPACK  turned away from the door and looked around as if he had forgotten something The Eye hastily added, “I’m going to try the Dissuasion Wave on the other two.”

“I don’t know, Arun. It’s not our property and we’re new to this village. I think we better not go in,” I advised as I clicked a photo for posterity.

“Also, it looks pretty sketchy,” Tod added, pointing up at gaps in the roof.

The Eye breathed a sigh of relief.”That was close, but we’re not done until they leave.”

“I’ll give FEMALE – PHONE  something to distract her,” said Leobald as he manipulated  a robotic hand to plant a showy wildflower into the garden.

“I have an idea, too. They won’t stay if it gets dark. Immediate temporal distortion in 3-2-1…” intoned Agent Aranja.

“I found some pretty things in the garden here – a yellow flower that must have survived all these years of neglect. Maybe we can recover some seeds and you can plant them in Bangalore.”

I looked up at the sky. It didn’t seem like we’d been here long enough for the sun to drop so close to the horizon. We were going to have to hustle to get off the mountain before dark.

“C’mon, let’s get them and then bail out of here before the sun sets.”

Arun nodded his agreement, and Tod stuffed the bills back into the mailbox. “We can ask Mr. Kawakami at the gas station if he knows this house and the story of what happened here,” Tod suggested as we picked our way through the high weeds and out of the property, photographing as we went.