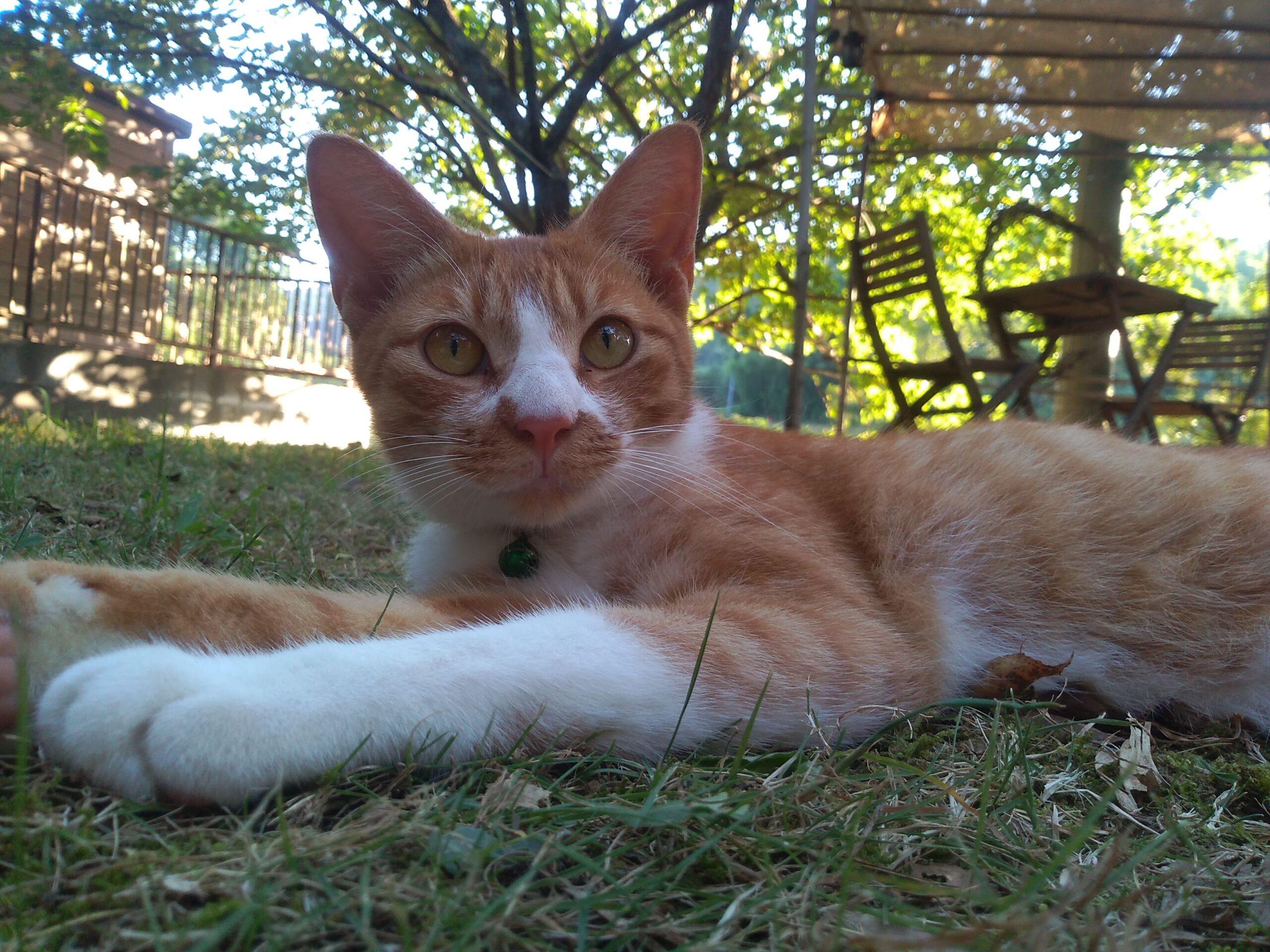 I am grieved to report that I found Futatsuyama on the side of the road this morning. He had been hit by a car and crossed the rainbow bridge without me knowing. We buried him next to Foreground Cat. I write this through tears.

Futatsuyama was the second kitten born in Three’s litter last April. Because of his birth order, combined with his determination to climb straight up his mother to nurse, I named him for one of the local mountains with a double peak.

He was a bright and curious troublemaker, right off the bat. He escaped the kitten box first and drove his mother to distraction as she tried to herd him back where he belonged.

He earned his nickname, Pesk, by getting into mischief. It was because of him that all the cats know our singsong warnings: No cats on the table; No cats in the kitchen, and the general-purpose No-no-no-no-no.

He got himself into predicaments from time to time. He was bitten by a poisonous snake and had a swollen leg for two days and a bald patch on his foot ever after. One evening he snuck into the car as we unloaded groceries and got locked in when we didn’t notice. He turned on the headlights and drained the battery, and chewed on all the door locks trying to get out. He was very smart, but needed a thumb.

Futatsuyama figured out how to use the cat door first and then taught everyone else, including his mother. He was the first to sit in my lap and that was a favorite activity even last night, when he sat with me in bed as we watched Star Trek. He was also the first to go to the vet when he got sick as a kitten; I told them he was my favorite. And it was true, but they are all my favorites.

The Weather FourCats, as Tod called them, loved each other, too. Every night when they came inside, they groomed each other during “licking hour” then fell asleep until we sent them outside with promises of fish treats, sung to the tune of the Star Trek TNG theme song. Indoors and out, they played and wrestled and slept in piles the way only litter mates do. Whether they were chasing palm fronds with us, or leaping over one another, or climbing trees, Futatsuyama was always the first and the most fearless.

I know that Maura, Isabella Bird, and Fritter are going to miss him. They paired up in different groups – Isabella Bird and Futatsuyama would go off hunting together. Fritter and Futatusyama were the “orange boys” who were nearly twins and so sweet to one another. Maura and Futatsuyama shared the food bowl. Even Gord doted on Futatsuyama and always tried to engage him in play. The dynamic will be different with him missing from the mix.

Futatsuyama didn’t sit as much as he melted across his perches. All his hyperintensity fell away when he relaxed. He loved to drape himself over the log in the garden, stretch out on the outdoor table, or claim the grand prize of my lap when I sat outside in the sun.

Futatsuyama was the most food-motivated cat of all of them. He loved anything in a plastic packet – whether it was cat food or my food. When I gave the cats treats, he would wrap his forelegs around my wrist and pull my hand down so he could have extra licks or try to steal the package. I had always intended to train him to do tricks for treats, but I never could bear to withhold the snacks from him.

No matter how much he ate, though, he rarely gained weight. His stripey orange coat was always glossy and his yellow-green eyes bright, with an almond squint that heralded his cunning moods. He was sleek and wiry with a tail that stood up tall and hooked at the end when he was happy. Which he often was.

Last year, after the typhoon, I started a daily yoga class with the neighbors and Futatsuyama often walked up the hill to the yoga space at Fujii-san’s with me. He and the others were my walking companions partway there, and would wait for me to come back before they went home. Sometimes I had to sing them out of hiding, but Futatsuyama was usually the first to appear, eager to walk home and have lunch.

Not one to deny him or his siblings much, during our pandemic home-staying this spring I capitulated to letting them into the 2nd floor studio where I work and now teach my yoga classes via Zoom. Futatsuyama would sit under my desk and lick my toes – or sometimes bite them and then fall asleep nestled between my feet. Or he would sit on my lap before yoga class. On Sunday, he sat on my meditation cushion for most of the class while we gazed at candles.

Although we were expecting this sad day to arrive eventually, it came too soon. He lived a great, if brief life. He had all of the outdoors to hunt and to climb trees, and the indoors for love and attention. And snacks, always snacks. I will miss this guy and his sweet, pesky ways.