Do It All Now

At the moment, I am full of ideas for my life. Business ventures. Partnerships. Renewal of old projects. Some of them are already in motion, others are just getting underway. Some are short term, others are long term. Many of them depend on one thing or another that is out of my control.

It’s a lot all at once, even though it won’t all happen at exactly the same time. I was feeling a bit overwhelmed about what’s happening in the next six months and beyond. I tried to put everything in a diary, but it didn’t show me that I’d covered all the topics. I made a list of all the projects and plans but that wasn’t quite enough. So then I made a sort-of Gannt chart. 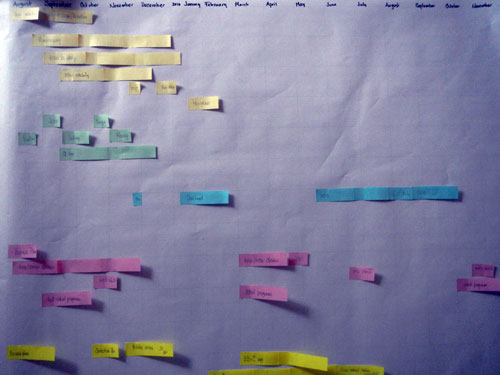 It showed me the projects and something important. Don’t wait. Do it all now. I could put some of my ideas on hold until one project is finished, or until life is in a stable configuration, or until the next milestone is reached, or choose the reason…that is stupid.
If I don’t start on these things now – on a limited scale or jumping right in – when I get an open slot to implement them, it’s going to be too late. I won’t have built the right connections or discovered setbacks or been able to get any experience. So instead of a month-long event ten months from now, why not do a week trial in six weeks? Why not start gathering information or making connections or whatever the first step is?
Unfortunately, this is pretty much the complete opposite of Tod’s view. He likes to finish one things before he begins another. Steady wins his race. And he cringes at plans, so trying to get dates or schedules or a time commitment is futile or leads to arguments. So I move ahead without him and if he wants to play along later, great. I’ll be ready for him.
Because I am going to do all the things. Now.