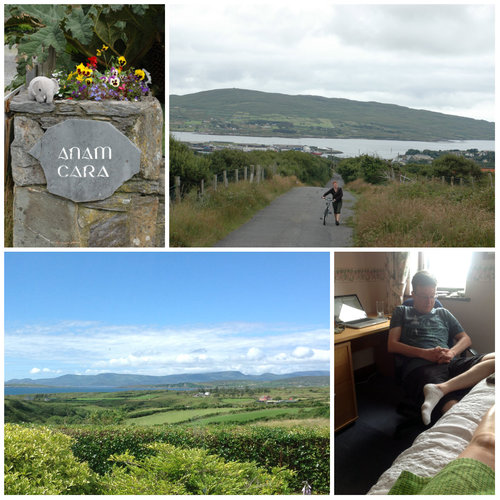 Twelve years ago, Tod & I visited Anam Cara for a poetry workshop given by my sister, Jenny Hill, and Jack McGuigan. (My main memory of that trip is memorialised in this poem.) When I realised that we’d be in the area this year for the European Juggling Convention in Millstreet, of course we had to return.

But Anam Cara isn’t for visitors; it’s a writer’s and artist’s retreat. You have to be working on a project. So Tod & I agreed to create a project sort of celebrating our 25th anniversary coming up later this year. You’ll hear more about that when it is done; for now we are keeping it under wraps.
We had only a few days at Anam Cara and we spent them in a mix of creating, communing with the other writers over meals, and exploring the area on foot and bicycle.
Unexpectedly, I was invited to do some hooping to help launch a book! Brian O’Sullivan read from his new book, Beara: Dark Legends, at a wine and cheese reception and I greeted people as they arrived with a little hooping and circus-y action set to traditional Irish dance music. It was a lot of fun and made me glad I’d packed a costume.