The Big One, Bunkyo style

Well, I think we just lived through the long-overdue, ever-feared “Big One” that seismologists have been predicting for decades. It didn’t have its epicenter in Tokyo, but we sure as fuck felt it. I can’t even imagine what it must have been nearer the epicenter. But let me tell you what it was like here.
Tod & I were together at home this afternoon when the quake struck at 2:45. It was scary. Our five story apartment building shuddered and rocked like a ship at sea.
After the first few seconds, when the initial shake started getting worse, I opened an exit to the balcony and we stood together in the doorway watching the birds flap confusedly, trees sway and every local structure rattle and moan. It was disconcerting and eerily beautiful at the same time. I was fascinated and calm while it happened and very grateful that I wasn’t alone. It seemed to last for an eternity, though it was maybe less than two minutes in reality. 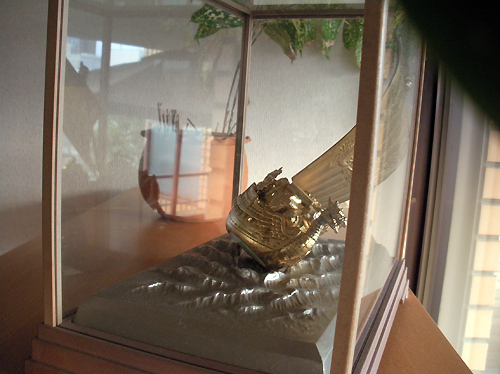 Our lucky boat capsized.
Even when the shaking calmed to a rolling wave and it seemed safe to move, things were still swaying. It felt like stepping back onto land after a long voyage and we were both feeling sort of seasick. I ran around the house to see what had happened. Stuff had fallen off shelves, counters and surfaces over all over the house, though amazingly enough nothing really broke. I put most of it to right in a few minutes.
The city made an emergency announcement over the public address system – the first time they have ever done that in my memory – though with the flapity-flap of helicopters and the echoing distortion off buildings, I could barely make out a word. Our apartment was still standing, so I figured we were fine to stay in it. We checked Twitter for the first details, updated Facebook status and more or less calmed down for a few minutes. 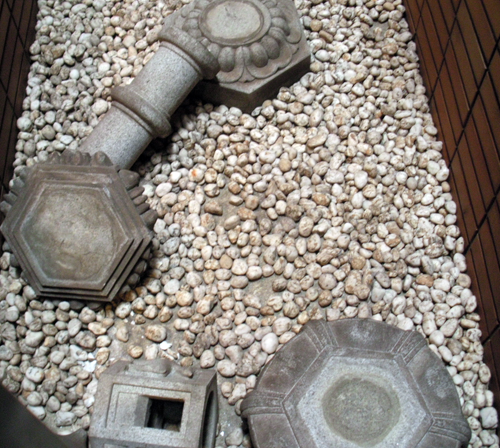 Japanese lanterns are stacked stones, now unstacked.
Then I wanted to go examine the what was up. In the hallway, the first sign of trouble. A stone lantern had fallen over and cracked the floor-to-ceiling plate glass window. Oops. Another stone lantern was toppled on the first floor, but that seems to be the extent of problems in our building. Amazing considering how loudly it was creaking and the amount of sway it experienced.
We went out to see the world. Really not a lot of damage in our area. A few unhitched cable TV wires and some crumbled old plaster. We stopped into the flower shop on the corner to check in with the store owner. She said she could see the big apartment buildings swaying. From one of the 13th floor balconies, someone’s stuff had fallen to the street. 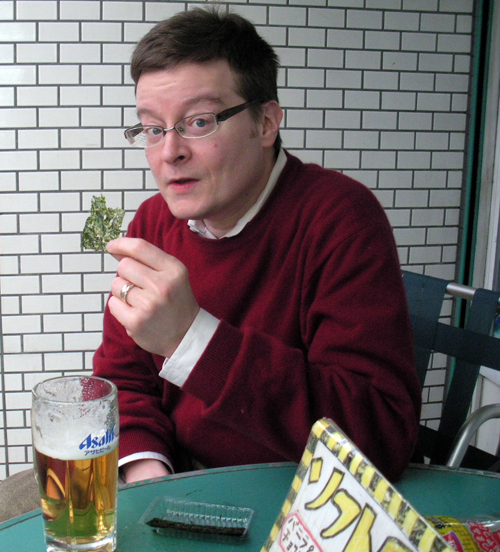 After the quake a beer to celebrate surviving.
We continued on to Kashiwaya, our local liquor store, to see how our friends there had fared and also to get a beer. Our friend and their shop were fine – two bottles of sake had toppled over and broken but that was all. We ordered two draft beers and sat at the table outside the shop to watch people go by. We got a lot of double takes and some envious smiles, the two of us calmly enjoying our drinks. The worse was over and we were safe together. It was going to be OK.
The sidewalk was crowded with commuters walking home because every train in the capitol was stopped. People were actually hurrying, unusual in a city where ambling is the norm. Kasuga Dori is a main emergency road and it was pretty much packed with people from the afternoon until well into the night. 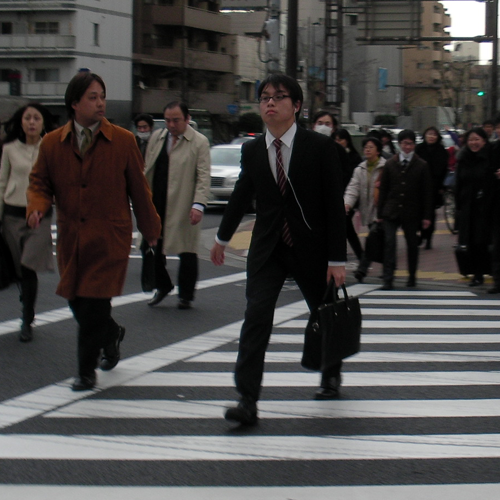 Determined walkers head home.
When it got cold after dark, I felt compelled to go out and give away my extra hats, gloves and scarves to all those people walking home a long way who needed them. I was oddly fearful to get too far from Tod so I pushed aside the feeling of needing to help and stayed inside. But the need to do something, anything to help people on this very strange day got too strong and I worked up the courage to go outside alone. It is hard to give stuff away in Tokyo, but I eventually found people who were cold enough to accept my mismatched accessories.
Now it’s almost 11 pm. We are listening to the Japanese news radio reporting on people trying to get home. At Shinjuku station the trains are still stopped, there is a 100 meter long queue for taxis…and no taxis. The streets are gridlocked with traffic. All the buses are completely crammed. Hotels are full. Convenience stores are running out of supplies in some places. Some people are in for a long, cold night. The aftershocks continue to make everything shake and sway in Tokyo.
And we got off lightly in Tokyo. The worst happened more than 300 km north of here. The magnitude of the quake was 100 times stronger than the one in Haiti last year. It reached the highest level of the Shindo scale, 7, and was eventually given an 8.9 magnitude.
Every minute brings more horrible news from the north. There’s a nuclear emergency in Fukushima with a reactor on the verge of melt down and people being evacuated; Kurihara, a town of 77,000, was entirely destroyed; 1800 people are taking refuge in an elementary school in Aomori; and the videos of the tsunami rolling inland are so disturbing that I can’t watch them. The grisly discoveries of corpses are just beginning; the number will not be small.
Tomorrow some friends and I are getting together to hoop at Yoyogi to relieve our stress and brainstorm ways we can help even a little bit. Feel free to join us. 12:30 in the usual place.